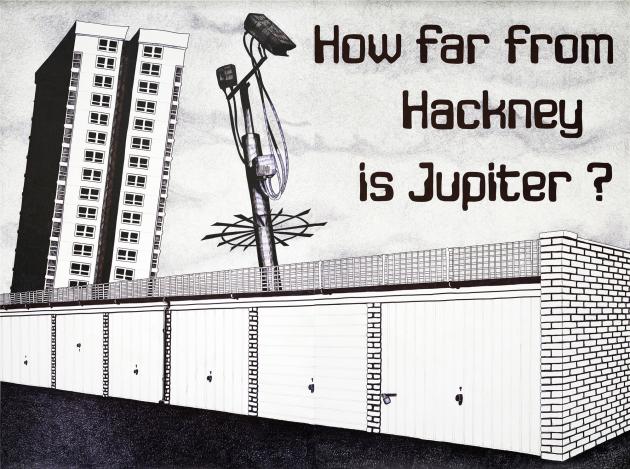 I am so incredibly flattered to have been one of the subjects interviewed for this project by the artist Aleksandra Mir.

The project is called Space Tapestry, and there are three main events (chapters) to it:

Aleksandra is famous for her large Sharpie murals. For this project, I went to her studio to see her work and to be interviewed and photographed. At her studio, large tubs of drained Sharpie markers lined the rim of a beautiful mural that said ‘Sorry’ in graphic novel-type style.

Other Sharpie murals were rolled up along the periphery, hiding their stories inside their rolls… and there were two beautiful murals unfurled on the walls: one reflecting the Space Station, and one of her well known ‘How Far From’ pieces.

After taking my shoes off, against all of my instincts, I walked onto the ‘Sorry’ mural to have my photo taken.  We shouldn’t walk on the work of well-known artists, surely!? Sorry!

A summary of the project, from the Modern Art Oxford page about Aleksandra Mir’s exhibition:

“Modern Art Oxford and Tate Liverpool are proud to jointly present chapters from Aleksandra Mir’s new work Space Tapestry. Inspired by the Bayeux Tapestry and the artists who depicted Halley’s Comet in 1066, it is a large-scale hand-drawn monochrome wall hanging which forms an immersive environment. Much like a graphic novel, Space Tapestry tells an episodic visual story of space travel.

Over the past three years, Mir has formed relationships with professionals in the space industry and academia who have informed and inspired the Space Tapestry. The work draws out themes relating to current debates, recorded events, scientific discoveries, technological innovations and predictions of an imagined future that currently affect all our lives.

Mir has brought together a team of more than 25 collaborators, aged 18–24, to collectively draw the work by hand in her London-based studio following the artist’s design while they also leave personal marks on the work.

The ambitious and large scale project is presented simultaneously at Modern Art Oxford and Tate Liverpool. Asking questions of and reflecting on the relative distances explored in the work – Jupiter is equally far away from Oxford as it is from Liverpool, for example – audiences are encouraged to visit both institutions to see the different chapters of the tapestry.

Modern Art Oxford presents Space Tapestry: Earth Observation & Human Spaceflight, the latest addition to Space Tapestry. The graphic and textual content of these chapters considers the evolution of advanced technology in relation to our daily lives, while a series of industry marketing slogans aimed at selling the future possibilities of space have been transformed by the young collaborators into visual poems that consider their own futures. The prospect of balancing technological progress with humanistic objectives is explored and expressed through the work’s layered and participatory execution.

As the density and utility of satellites increases and human spaceflight enters the next phase of civilians following trained astronauts into space, the emergent fields of space policy, economics and law, space medicine, space psychology, space sociology and space communication follow and feed into our pop cultural ideas of space. Mir’s drawings at Modern Art Oxford both celebrate and ask questions of their expertise.